From the art project “11 Days” by artist Florian Mehnert

Last year I was contacted by an artist from Germany regarding the web-controlled paintball gun that I had built.  He said he wanted to use it in an art project he was planning and wanted to know if I would be willing to help him build his own paintball turret that could be controlled via the internet.

Since my original intent for building the paintball gun was to allow people to control it over the internet (but, alas…life and all that got in the way) I was excited to have the opportunity not only to provide assistance, but to finally see that vision realized.  I mean, how cool is it to be able to control something like that over the internet…but how much cooler to control it when it’s half-way around the world!

After several months of e-mails back and forth, we started in earnest around December of 2014.  I sketched out the basics of the design and gave him a hardware list.  He had constructed his own base for the turret which I thought was a very elegant and simple design.  I sent him wiring schematics and in short order he had a working paintball turret.

The next thing was for me to update the software that would be needed to control the gun.  I had written several versions of the software previously, including one that allows people to vote via hashtag on Twitter and have the paintball gun shoot some pre-programmed target based on the the tally, but I needed to make sure it would be robust enough to handle a LOT of traffic PLUS I had to add a queuing system and some other features.

I won’t go into all he boring details here (I’m more than happy to do that if you want to contact me to discuss the project, however…) so here is a summary of what was used and how it was setup.

The first thing to figure out was how all of the moving parts would fit together.  After a couple trials, I decided on a distributed approach that consisted of: 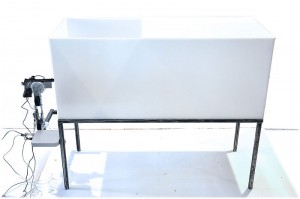 This type of setup gives maximum flexibility and allows for variations in implementation…in other words, the “middleware”, so to speak, at the web server layer is responsible for making sure that the translated user movements fit within the limitations of the local configuration.  If you want to change the experience…say, the way the user can move the paintball gun, for example…you could do that by changing just the middleware layer and leave all of the other stuff alone.

The video server was a very simple setup:  FFMPEG running on the local computer connecting to a remote streaming server (also Node JS.)  When a user connects to the website, a video streaming socket is also opened so that they can watch as other people move the turret around.

One of the major benefits of this setup was that the artist’s internet connection at his studio did not have to be hugely robust (decent, but not super fast) as all the heavy lifting would be handled by the remote server. After all, it was only used for the video stream and basically-one way communication to the local Node controller (in, fact, if not for the video stream, the connection would not need to be very fast at all.)

The artist, Florian Mehnert, had caused some controversy with his previous art projects (just Google Florian Mehnert) and this project was not going to disappoint.

As a sort of protest against the use of drone strikes, he was going to allow people from all over the world to control a gun (no one knew is was a paintball gun at the time) and be able to shoot a rat at the end of an 11 day countdown.

Long story short, the project caused all kinds of commotion over in Europe, leading to extreme spikes in traffic on the website and news reports, even death threats.  In fact, the threats got so bad that the experiment ended early and the rat was removed from the experiment (don’t worry, the rat was never actually going to be shot.)

If you visit the site now, you’ll see the true intent and message of the project.

I had planned on posting all of the code to GitHub, but have not had the time to get it prepared for public use.  However, if you think you would like to experiment with the code in your own, project, just drop me a line.

After getting the dome glued on and sanded a bit, it’s time to glue on the face mask onto the underlying form.  This gives the helmet some of its depth.

This is where the spray bottle once again comes in handy.  Wetting the cardboard (but not too much!) allows you to more easily shape it.

Also, you can never have too many clamps!  If you don’t have at least 8 or 10 clamps in various sizes, I suggest getting some.  They are invaluable in making sure everything is glued up properly.

Once everything is dry, it’s time to cut out the cheeks. Go slow and take your time.

You can see that I had made initial cuts for the cheeks and visor in the cardboard before gluing it on.

You can never have too many clamps!

I took a pencil and traced the initial cuts to make them easier to see while I was cutting them out.

TIP: Change your blade often, especially when you are about to make detailed cuts!

Once the cheeks are cut out, it’s time to trace and cut out the actual cheek inserts.  Again, take your time and go slow.  These can be tricky to attach just right.  I also recommend cutting at 45 degree angle along the edges of the cheek plate (angling from the edge of the insert up) to make them fit a little more flush.

After the cheeks are cut out, make sure that the facemask is securely attached to the underlying layer. I noticed some gaps so I applied some glue and clamped them back up for a bit. After that I took some 150 grit sand paper and smoothed the edges a bit so that the cheeks inserts would fit better.

Helmet with cheeks cut out.

Since the cardboard is 2mm thick, I cut a very light surface cut at an angle where the cheek inserts will bend.  Check reference photos of the Boba Fett helmet to see what I mean, but you can see them in the next picture.

TIP:  Use reference photos A LOT to make sure you are fitting parts together correctly and getting the right kinds of edges (if you want to stay somewhat true to original, that is…)

As you can see I did not get the 45 degree angle exact, so there is a little bit of a gap where the cheek attaches…but that’s ok. It’s pretty close and if you look at reference photos those are not “sharp” edges on the original helmet and the fiberglass/bondo application should help with that. The unsharp edges help contribute to the “used” look of the most of the costumes and props of the Star Wars galaxy.

Plus, this is my first time making something like this so I’m trying to give myself some slack and turn off my OCD or I might never get anything done 🙂